"The money is mine. I do what I want to do. I am not using your cash, am I? — Illegal logging is rampant in Tashkent amid assault on eco-activist

Nikita Makarenko, an eco-blogger who had been investigating damage to the roots of 11 trees on Shota Rustaveli Street in Tashkent, was assaulted on August 11. "Daryo" correspondent Musulmonbek Ibrohimov studied the case. 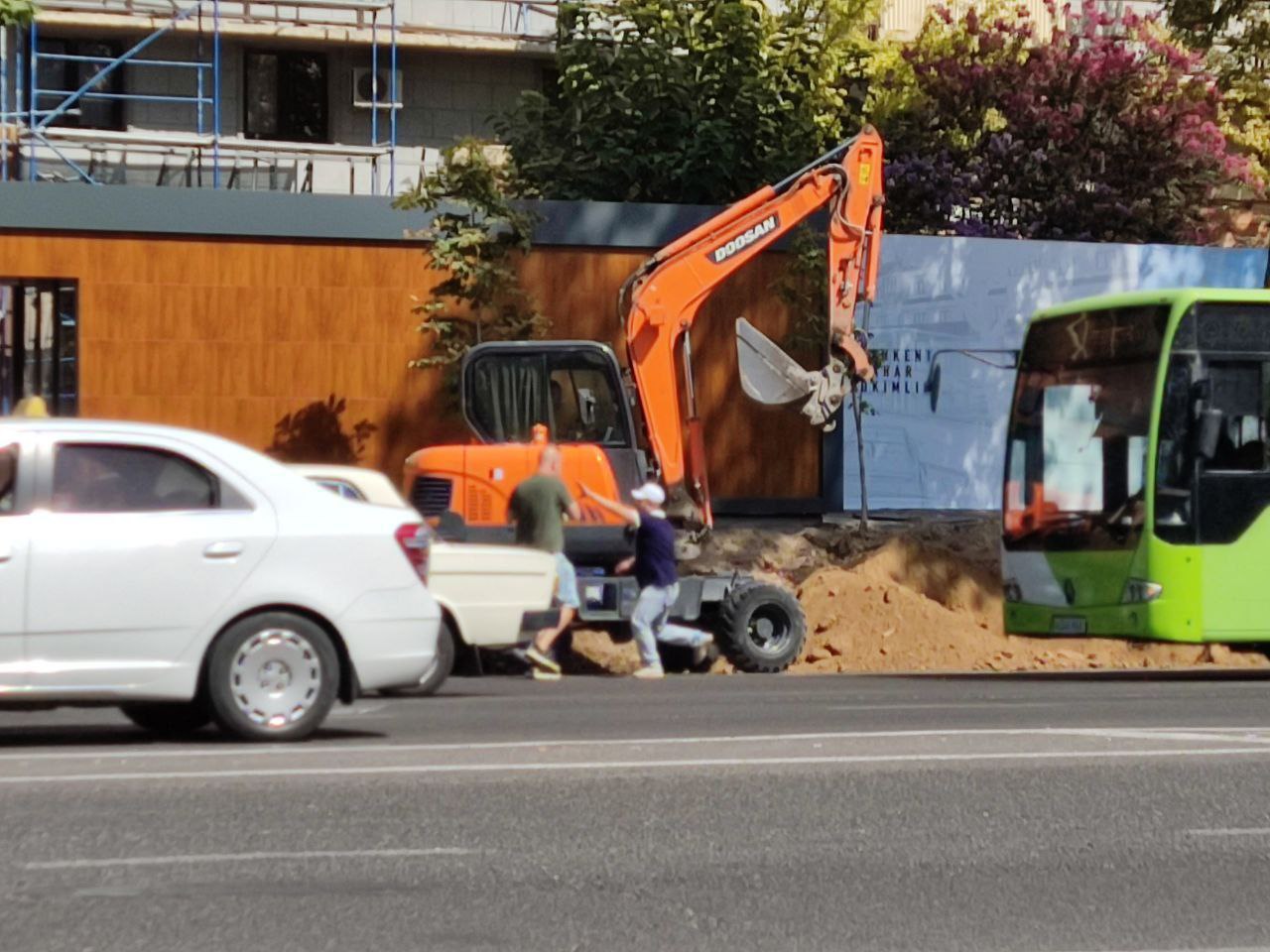 Blogger Nikita Makarenko said that in June, 11 trees were damaged during the repair of the facade of house 28 on Shota Rustaveli street. The roots of 4 healthy sycamore trees (one more sycamore tree is about to be planted) and 7 young chestnut trees were cut and roots were exposed. A formal complaint was filed with the authorities.

A month later, Nikita Makarenko studied and saw that nothing had been done to save the trees and only the soil was laid over the poor trees after a shocking story in Chilanzar street, Tashkent.

"A month ago, an appeal had been summited to the Eco-Committee, but they did nothing. When I came to the scene, a man who introduced himself as the Discovery Invest construction company, representative, assailed and tried to take away my phone. I don't know why he did this illegal deed. Anyone, journalists and bloggers can film. It is legal. "I have already filed to the police to take legal action against an assailant," Makarenko said. 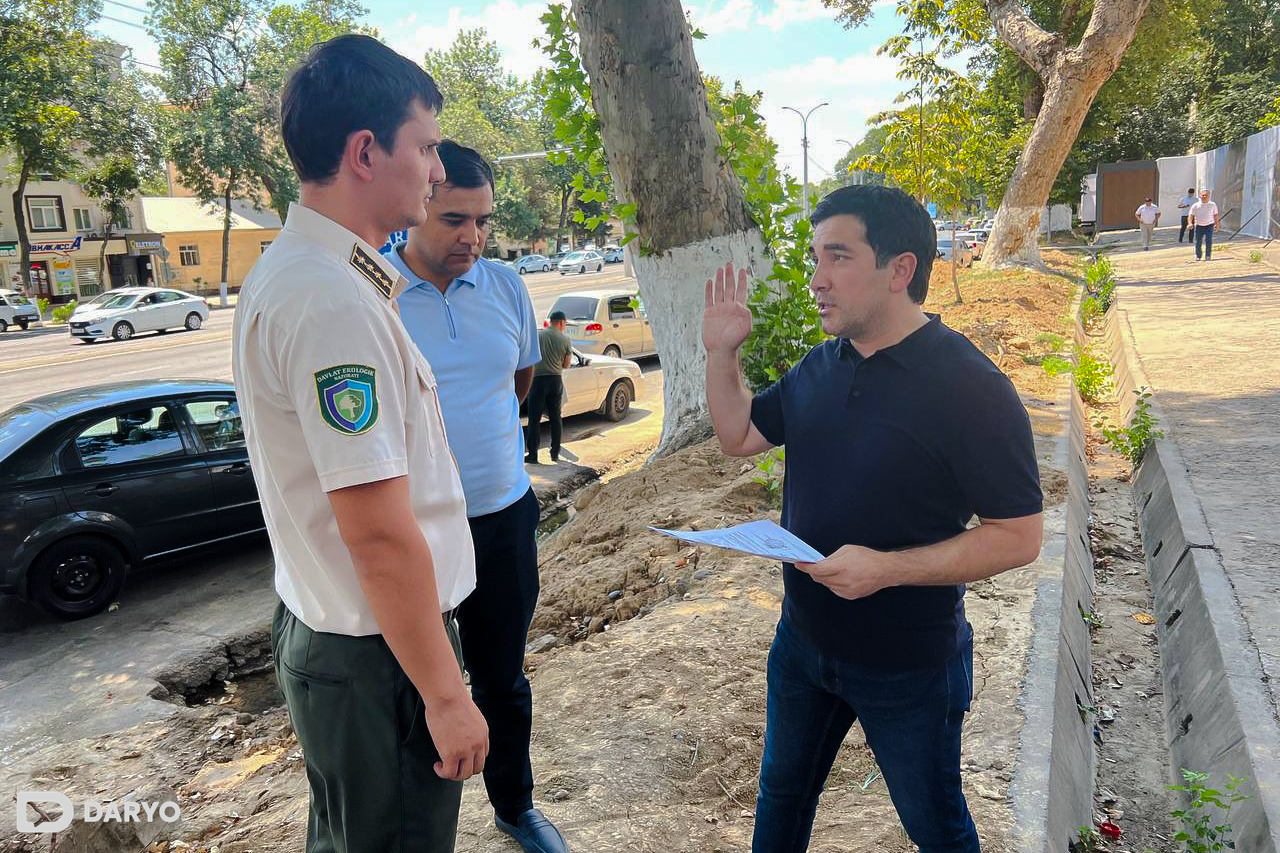 Oybek Usmanov, head of Yakkasaray district department of ecology and environmental protection, told "Daryo" that a month ago, the situation was investigated on the web portal of the Tashkent city administration.

"The website received a complaint about the removal of the roots of 5 maple trees and 7 young chestnut trees. When we arrived there, it was found that the roots of the trees were excavated. Based on this fact, we issued a warning letter to the construction organization. It shows how to prevent trees from drying out and how to organize irrigation. After that, the roots were covered with soil. Later, the soil was removed and the roots were exposed again. This case is Article 79 of the Code of Administrative Responsibility (illegal cutting, felling, damage, destruction or transplanting of trees, bushes, other plants and seedlings) will be the basis for drawing up an administrative report ", Usmanov said.

Strangely, Usmanov told the name of an unknown company that received the warning, before he mentioned the Discovery Invest company. Unfortunately, the eco-officer could not present that warning letter. When we asked why measures were taken in the public interest, he answered, "Look, we are taking measures."

The situation became more ridiculous when the media were anxiously waiting for authorities' response,  Oybek Usmanov, told the reporter of "Daryo" "Look, the construction company is correcting the mistake." Apparently, he tried to sweep the matter under the rug.

Later, it became clear that the construction company is not Discovery Invest as mentioned by Oybek Usmanov, but a completely different organization, and the work started before the official approval from the city administration. 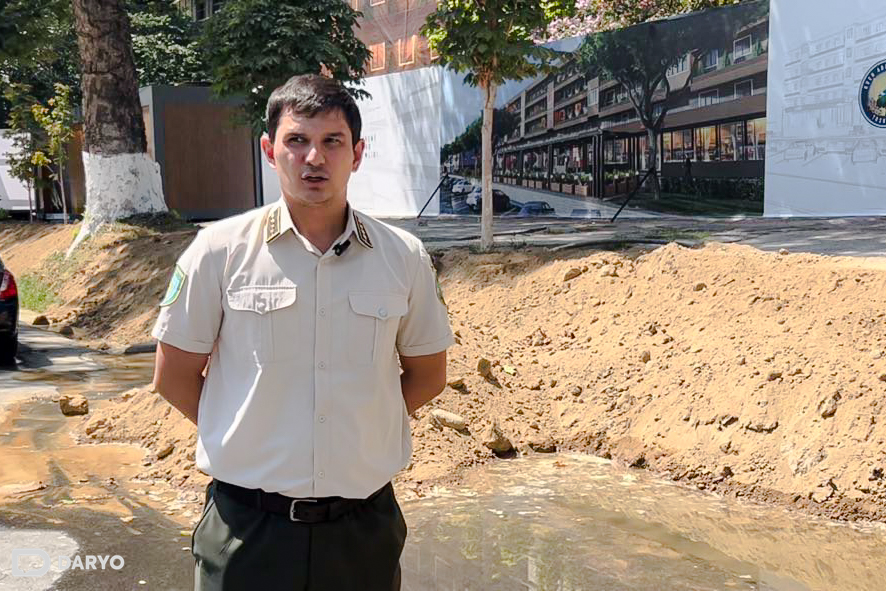 There is no builder

Journalists and bloggers, all officials: the district governor, internal affairs, and environmentalists searched for a representative of the construction organization for a long time. And we had to wait for a long time.

There is no construction notice board on the site. No contractor’s name, no plan, no project.  There are only banners with beautiful pictures and the logo of the Tashkent city administration.

"Although these cases were discovered a long time ago, no case has yet been initiated. After the public outrage, the staff of the Eco-Committee came and drew up an act. We have to know the contractor’s name, the general contractor, and the project name. The ordinary people are looking at us and want to know the truth," Umid Gafurov, the blogger, said.

Only after he complained about the continued barbaric treatment of trees, employees from various organizations began to arrive at the scene, including Yakkasaroy district khokim, Anvar Sayfutdinov.

No wonder the authorities arrived so quickly at the scene after the sacking of their colleagues against the backdrop of the "tree looting" in the Chilonzor district.

In an interview with the reporter of "Daryo", district governor Anvar Sayfutdinov contradicted the information provided by environmentalists.

Oybek Usmanov, the chief ecologist of the district, said that the trees were really damaged.  The damage is not serious, and one maple tree was partially damaged due to natural factors.

The mayor said that the trees were not damaged and that a maple tree was commissioned to be cut down earlier.

"That tree (meaning a maple tree) was already dead two years ago. The permission was given. Damage to the roots of trees does not mean that they are dead. Now they have brought fertilizer. Experts will do the necessary work to save the tree lives," Anvar Sayfutdinov said.

After sometime, the site constructor appeared at the scene starting to explain the project.  At that time, for some reason, Anvar Saifutdinov interrupted and said that he would give an explanation. To the question of "Daryo" reporter, "Look, the builder is giving an explanation, he must know the construction works himself", the mayor repeated that he will explain the situation himself. After a while, a person who introduced himself as the head of the construction organization started to join the conversation, the mayor called him to be quiet and said, "The builder will be punished for his carelessness, he will pay the fine."

He is a self-employed person

A young man named Shahzad came and said that he was a builder and that they were doing all the work, and the contractor was Millimetre Construction Company LLC.

"We will pour concrete next to the ditch. We were about to open it and quickly close it again. Because the roots came out, we stopped the work and covered them with soil. According to our plan, green grass will be planted under the trees. We will preserve all the trees," he said.

When asked about the project documents and the customer, he said, "It is being prepared now. We do it ourselves," said the subcontractor, who did not want to name the organization.

At the same time, a person named Rustam, who introduced himself as the head of Millimetre Construction Company LLC, interrupted the conversation and said, The money is mine. I do what I want to do. I am not using your cash, am I?" he said to the journalists.

"This is being done under the auspices of the Discovery Invest company as an example," Sayfutdinov added.

Discovery Invest was registered in September 2008. 67 percent of the company belongs to Ismail Israilov, and 33 percent to Abdurasul Zohidov.

Ismail Israilov previously worked as a director and deputy director of Akfa Engineering and Management. He also has a stake in the Kolorpak printing house (36.7 percent) and the TV and radio channel "Zor TV" (50 percent).

In January 2020, Abdurasul Zohidov was awarded the Order of Friendship as the director of Discovery Invest (he built Tashkent City and Ashgabat Parks, the Hilton Hotel as a congress center, Imzo and Artel factories, Akfa Medline and other facilities).

According to the Intellectual Property Agency, the Discovery Invest trademark belongs to the company Power Construction Planet (now Discovery Invest), and the sole founder of the application for registration of the mark (patent) is Tashkent given by J-United Group. The sole owner of the Group is Jakhongir Ortiqkhojayev. This company has more than 200 trademarks in total.